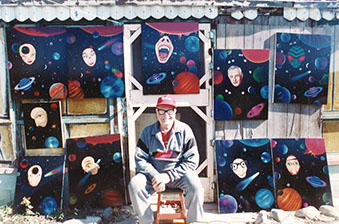 SpaceFace is the brainchild of visionary Scott A. Kudler, an attorney with a background in Art. During his post-graduate years, Scott’s path crossed with Jim Gaines, a renowned artist. With each visit Scott paid Jim, he was introduced to one of Jim’s hobbies. And one day, Jim presented a collection of oils he had painted of funny heads floating in space. And so SpaceFace was born…

Their association led to a series of character creations which became the basis for the heroes and villains that populate the SpaceFace universe. The images and fantasy world possibilities challenged Kudler. He finally gave into his imagination and began his journey to see SpaceFace realized. He felt the burgeoning fields of gaming, science fiction, education, and excitement were ready to unite into his vision. Scott knew that he wanted the level of the SpaceFace experience to reach the pinnacle of the competition. He did not want to mimic it, but rather take it to new levels.

After a lengthy search, Kudler chose to enlist the story and gaming talents of David Garber, a writer/producer of children’s network TV and an award winner; an international Emmy for best Children’s science fiction series, as well multiple accolades for his work starting Saved By The Bell and writing and staffing the long running iconic series, The Power Rangers. At the time of his joining the SpaceFace team, Garber was working in game development for Disney interactive on the sequel to Epic Mickey and the Kingdom Heart franchises.

Armed with the overall scope of the legend of SpaceFace, Kudler next sought out the video gaming and programming specialists of Symbolic Pictures, specifically their team leader and specialist Andy Kreiser, Working alongside the Symbolic team who developed projects for the NFL, Hasbro, Mattel, and Nickelodeon, Scott and his top-tier team fashioned the engaging challenges and adventures that comprise the SpaceFace world.

The result is an entertaining and engaging experience for players of all levels. The challenges are enhanced by fresh and unique characters who join forces to save a peaceful planet, which serves as a melting pot for galactic beings of all kinds, from potential annihilation.